It’s been a challenging year for the endangered white rhino and EXPLORE was fortunate to be part of a significant effort to help them out. Invited to represent the US African safari industry, founder Cherri Briggs attended the release of six white rhino into Botswana’s Okavango Delta. Luxury safari lodge owner ‘andBeyond’ launched its initiative “Rhinos Without Borders” in May of this year-an aggressive effort to transfer the highly threatened rhino from South Africa to the safe haven of Botswana.

Cherri was also featured in a two-page layout in prestigious Departures magazine in which Editor-in-Chief Richard Story dubs her “the queen of the African safari” after they embarked on an unforgettable adventure together (he didn’t want to leave….). Click below to watch video of Cherri’s take on the rhino release, ‘andBeyond’’s full length mini-documentary of “Rhinos Without Borders” and Richard Story on rhino poaching. Keep clicking if you want to read the entire interview with Cherri in Departures magazine Africa edition. 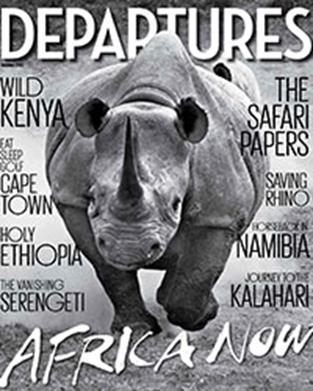